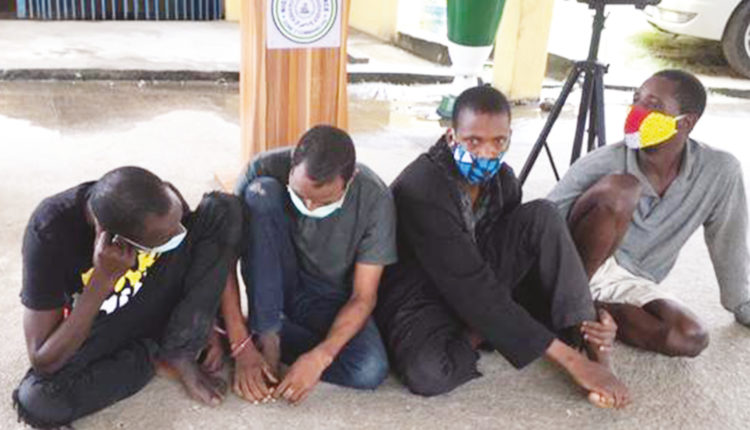 LAGOS – A suspected Kidnapper, Ibrahim Muhammed, on Wednesday told officers of the Police Command at the Zone 2 how he and five others abducted a serving female Police Inspector and operatives of the Nigeria Security and Civil Defence Corps and one Alhaji Oro.

“After the Alhaji was kidnapped, we held him for four days and then demand­ed for ransom of N4 million from his family. Despite the fact that the money was paid on time, we still killed the man and left the scene and trekked from Ogun State forest for two weeks, before we ambushed another vic­tim, one Umaru, at Awaiye village in Oyo State.

“Umaru was also coming to check his farm, when we ambushed him. We held him for two days and demanded N1million for his release from his family members. We released him after the money was paid,” he narrated.

Muhammed added that after they had released Umaru, while running away from the forest, they came across one Alhaji Adegoke, near Iseyin in Oyo State and he was also abducted and N25 million ransom was demanded from his family members before they would release him.

He said, “Where we kept the Alhaji, Sodiq was as­signed to guard him from escaping, while Sulaiman, Saliu Tambaye, and I went out for another operation, but before we came back the suspect had escaped. Sodiq slept off; that was how he was able to run and we didn’t collect any mon­ey from him.

The suspect confessed that their first operation was initiated by one Mu­hammed Usman whose younger brother was help­ing a Civil Defence Corps Operatives to take care of his cows at Eggua area of Ogun State. It was gathered that Us­man brought the idea that they should abduct the NSCDC official and collect ransom from his family.

He said that was how they swung into action and kidnapped him on the fate­ful day he came to check on the cows at the farm.

He was abducted and we kept him in the forest for three days; we moved him from one forest to an­other within three days.

“Before he was released, we collected three million naira from his family mem­bers,” he said.

Muhammed said on the day they were taking the NSCDC official to a spot where his family members would meet him, they also kidnapped one Alhaji Oro who was also coming to check his cows in another farm in Eggua area of Yewa.

“When we noticed he had escaped, we went into the forest shooting sporad­ically thinking that he was still within the forest, be­cause, if he wert to be there, we would have killed him.”

Muhammaed said it was poverty that made him to join the gang when I was in­vited for the kidnap of the NSCDC Operatives.

A 38 year-old herbalist, Musa, whom the police claimed was preparing charms for them before going on operation was also arrested by detectives attached to the Zonal Mon­itoring Unit of the Com­mand.

Musa who spoke with our correspondent said truly he is an herbalist, but does not prepare charms for them, claiming that Adamu was his friend and he came visiting him at his house, not knowing he has committed a crime.

“Mohammed also used my phone to call Adamu, not knowing that Adamu had been arrested, that was how I was also picked. I was also given two cows stolen from the NSCDC official,” he said.

He said, “The suspects consist of three deadly kidnapping syndicates of young men, who have seri­al records of abduction and killings in South West zone. They have kidnapped a po­lice woman, operatives of Nigeria Security and Civil Defence Corps and collect­ed ransom before setting them free.”