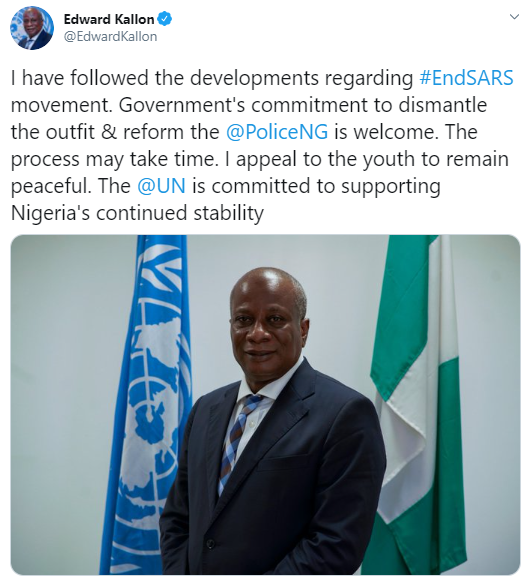 The United Nations Humanitarian Coordinator in Nigeria, Edward Kallon has called on Nigerian youths to remain peaceful while protesting police brutality in the country.

The protests have been taking place since last week as youths call on the government to actually put an end to the Special Anti-Robbery Squad of the Nigerian Police Force, and not just pay lip service as has been done in previous years.

Over the weekend, the Inspector General of Police, Adamu Mohammed announced that SARS has been dissolved. On Tuesday, October 13, the IGP created SWAT (Special Weapons and Tactics) as a replacement for SARS.

However, Nigerians have refused to back down this time as they insist it will still be the same officers who will be redeployed into the same unit. As a result, the protest continues.

Reacting, Edward Kallon tweeted: “I have followed the developments regarding #EndSARS movement. Government’s commitment to dismantle the outfit & reform the @PoliceNG is welcome. The process may take time. I appeal to the youth to remain peaceful. The @UN is committed to supporting Nigeria’s continued stability.”